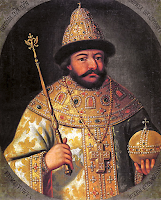 The ever-excellent ConcertoNet headlined its review of this new production of Boris at the Bastille “Un tsar et un chef” (a Czar and a conductor, only it doesn’t sound as good in English) and I can understand why. Ildar Abdrazakov and Vladimir Jurowski were the stars of this show, and their approaches (just as well, I suppose) had something in common. Jurowski, whom I’ve long admired but too rarely had the good fortune to find in the pit, conducts with quiet, calm authority, attentive to detail, visibly in charge. He doesn’t go after the deliberately spectacular: his is not a “blockbuster” or expressionist Boris: just musical. Similarly, Abdrazakov’s Czar is intensely human, neither vocally nor dramatically exaggerated: just convincing. His sound is almost baritonal, and dryish, not a deep, dark, treacly, “Slav-sounding” wounded bear of a bass. His acting was perfectly judged.

Not that there was much wrong with the rest of the cast - or of course the chorus, who obviously have plenty of opportunity to shine in this work. In a production where the director didn’t seem to have made a great job of actually directing the singers, the impression I got was that their impact depended in part on their own, individual acting ability, i.e. whatever dramatic baggage they brought with them. I like Maxim Paster very much and he does a wry and insinuating Shuysky very well, but as we saw (or rather, heard) in The Snow Maiden, his elegant voice doesn’t carry well at the Bastille. No problem for me, but I was on the second row of the stalls; possibly a problem for people up near the roof at the back. Boris Pinkhasovich was an extremely impressive Clerk of the Duma: a solid, straightforward sound; Ain Anger a striking Pimen, perhaps a bit short on dark, Rasputin-like religious mania; Dmitry Golovnin a resounding - and in his case quite mad-looking - Grigoryi, with more of the character tenor in his sound than Pinkhasovich. Nikitin seemed on much better form as Varlaam, subtle and musical, than as Klingsor in May. Vasily Efimov actually sang the part of the Innocent rather than whining it out as some do. I was probably not alone in feeling sorry for him having to do it covered in dried mud, naked but for a filthy pair of Y-fronts.

In the 1869 version there isn't a great deal for the women to do, and there isn’t much to say about them, other than that Evdokia Malevskaya made a very waif-like, curious-looking and sounding Fyodor - a kind of Russian Yniold, as one critic cleverly put it, though you might even say she looked a little bit like a young Gollum in a striped jersey.

Overall it was, therefore, musically and vocally a very good performance, with Jurowski firmly at the helm and Abdrazakov the absolute star of a very strong cast.

Ivo van Hove’s new production is plain and simple, so much so that one friend e-mailed to me “So dull that I had forgotten the name of the director.” I have read online that it was initially to have been less plain and simple, but was pared down for technical reasons. I have also read that the ONP insisted on 1869 and nothing but 1869 for reasons of economy. That didn’t stop the chap behind, when the Innocent appeared, whispering to his wife: “This is the Polish act: soon we’ll have Marina.”

It is played without a break in a single set. The rear wall, raised up to above head height, is broken only by a dark, rectangular opening towards the right. From that, a broad staircase descends diagonally into a large trap in the stage. At the opening, perhaps a sign of mourning, perhaps just of good housekeeping, the stairs are shrouded in black cloth, but once the ceremonials start (the procession rising through the trap) their red velvet is revealed. Cool overhead lighting is concealed by massive concrete beams. A few very simple chairs and tables are scatted on stage.

The chorus appear in drab modern clothing that will get shabbier as Boris’s reign advances. Boris and boyars are all in plain business suits, none of them particularly well cut. Whether they are meant to look cheap or not, I don’t know, but they do, and about half the men’s ties are loose (something that annoys me, because I don’t see the point of wearing a tie if it isn’t actually tied), so perhaps the general slovenliness is “voulu” and the boyars are supposed to be a louche bunch. There is no ancient, bejewelled, Russian brocade, but Boris’s orb, sceptre and crown gleam very splendidly in the spotlights.

The rear wall is, it turns out, a screen and the side walls are mirrors, reflecting it. The action on stage is doubled by gigantic videos that some people found distracting. I didn’t. Sometimes you see the chorus from above, in slow motion, sometimes close-ups. For the Lithuanian border, we get grimy industrial landscapes in the rain; for Fyodor’s future Czardom, wheatfields and majestic mountain landscapes. At the end, we see a really grisly and copiously bloody close-up of a dagger tearing through the late Czarevich, and Boris’s bloodied face.

The overall dramatic concept seems Shakespearean, recalling among other plays, Macbeth: the dead child is sometimes present, curly-haired and in a red jacket, to haunt Boris; later, the urchins who taunt the Innocent all turn into little Czareviches, staring him down from the stairs.

The quality of acting appeared, as I said, to depend on how good an actor each singer was, rather than on detailed directing. The chorus was sometimes blocked in diagonal lines parallel to the stairs, but also often just lined up at the edge of the stage to sing at us, which is certainly impressive as far as sound goes.

At the end, a final directorial idea, Grigoryi stabs Fyodor, and we’re back where we started, as Anna Russell might say, though in this case only 2 hours 10 minutes ago. If it’s true that Ivo van Hove had to curb his ambition, it must have been frustrating for him and may explain why the staging ended up so flat. With the music and singing being so good, it had relatively little impact, and I found myself seeing it as a kind of semi-staging, and wondering if it mightn’t just as well have been given in concert. My friend forgot who directed it; I suspect we’ll have a hard time remembering this production at all.
2018 Bastille Boris Godunov mussorgsky Paris