First staged 25 years ago, this production of Atys, never forgotten, has achieved legendary status in France. In the early eighties, the Rameau and Händel tercentenaries brought us a flourish of baroque revivals; but it was Atys that really confirmed, in Paris at least, that baroque was back in the operatic repertoire for good. It seemed at once to bring the court of Louis XIV majestically back to life before our eyes – not through rose-tinted glasses, but largely austere and stiff with convention, yet bristling with intrigue and potentially dangerous – and demonstrate, equally majestically, that Lully's tragédie lyrique remained a meaningful, viable art form for modern audiences.

So now as then, at the intervals and at the end, “magnifique” and “extraordinaire” were to be heard all round.

Why? It seems odd to need to describe a production as famous as this one; but as far as I know there has never been a commercial video, only very blurry clips on YouTube. And in any case, only high definition could really do it justice, for purely technical reasons: pre-HD TV simply didn’t reproduce proper black, nor was it able to convey sharp shafts of gleaming light or even certain colours such as mauves and purples (we may have thought all the spectrum was there, but that was just habit: remember NTSC?). So, for those who have no idea, I’ll describe it here while hoping that at last Atys will be filmed in high definition and put on sale for wider viewing.

Again, why the “magnifiques” and “extraordinaires”? Well, if there’s such a thing as a perfect production, this is one of them; at any rate, of its kind they don’t come any better. It is neither a Regie ideas-machine in the Warlikowski vein, nor an attempt at recreating period practice, like Benjamin Lazar's candle-lit Cadmus et Hermione in the same house. The fundamentally intelligent concept seems to have been as (a) this is a tragedy and (b) the Sun King was often at war and his court was often bereaved, to stage the work not in the period’s own extravagant take on classical mythology, but in (splendid) court mourning. The set is simple but stately, the dark costumes – hundreds of them, it seems - are simply amazing, and the placing and acting, though still hieratic, is of the utmost professionalism: everything is just right. And the story, once this scene is set, is straightforwardly but grippingly told.

The usual prologue in praise of the king is dealt with as a rehearsal, in a room lined with tapestries of the same bleak landscape of bare trees as on the curtain that rose to reveal it; the chorus watch and chatter and sing from the cornice above, under the coffered ceileing – all we see is their bewigged heads. Towards the end of this prelude, in strides a sinister major-domo in black court dress with a giant, feathered hat in his hand to put a stop to the shenanigans (involving not just singers and dancers but also commedia dell’arte players fooling around with the dance-master). At the final chord, the tapestries fall to reveal the walls behind: black marble.

The four acts then take place in this funereal space floored with patterned marble (a central lozenge and four large circles), furnished, as in Versailles, with silver objects: stools, throne, braziers, etc., and for the last act with a silver enclosure bearing tall candles: a kind of altar-space for the now-furious Cybèle. There are doors at the sides and rear and lighting often streams, like golden daylight, through them.

Soloists and chorus are dressed in a sumptuous succession of beautifully designed, cut, embroidered and bejewelled costumes in every shade and texture of black (velvets, silks, satins…), some greys, maybe some violet, Bordeaux and brown, occasionally, just occasionally, cream… Stiff, narrow court dresses for the women with funereal, fringed cartouche-like hangings of silver embroidery, lace trimmings and high, narrow, linen headdresses; for the men, tight black coats, breeches and stockings, more lace, more linen and more embroidery; and throughout a profusion of elaborate white or grey wigs, peaked or not. Cybèle is done up rather like a weeping Virgin, in nearly-plain black with a long train, a silver crown and spiky halo, a sceptre and a sprig of pine. Her attendants (in deepest black) and zephyrs (in creamy white, edged with shorn fur) are 17th-century nuns with widows’ peaks, Atys, at first in coat and breeches like the others, once ordained, dons a long grey cassock lined with cardinal red and a modest, priestly black hat with white feathers. This austere magnificence is broken – as in Lully's score, interestingly on sale alongside the programmes – by the dream sequence, with costumes in every shade of gold from white to copper, and the curtailed wedding, with harlequin dancers in pale, sage green and old rose.

As I already said, every grouping, action and gesture is perfectly managed. The dancers, for once, look in their place. And the singers, despite the formality of it all, throw themselves into both tragedy and music with total commitment, hence those spontaneous cries of “magnifique,” for example at the end of the second part (the evening was divided into three, over four hours in total) after the dream scene and Cybèle’s indeed magnificent “Espoir si cher et si doux…”

I needn’t bother comparing the present performance with the original, on the famous CDs. Obviously Christie (who often simply stands and observes) and Les Arts Florissants – continuo, orchestra and chorus - are by now as fluent in this work as can be. In some cases the singers are even better than before: the casting, here, was so luxurious as to have Paul Agnew and Cyril Auvity as, respectively, Le Sommeil and Morphée – not exactly leading roles, albeit very good ones. Nicolas Rivencq was as dashing as the king, Célénus (here obviously modelled on a slender young Louis XIV himself) in gun-metal armour, a giant cape and the most flowing white wig of all, as he was a quarter of a century back. Emmanuelle de Negri was an irreproachable Sangaride. Stéphanie d’Oustrac looks and sings a very different Cybèle from Guillemette Laurens but must now be at the height of her powers. And Bernard Richter was simply outstanding in what is a killingly long role: much more of him, please. I note, by the way, a point of interest to all regular opera-goers: the sets for this production have walls and a ceiling, forming – as a very experienced friend put it the other evening – a megaphone. So not once all evening did we have to strain to hear. Cyril Auvity, inaudible even with amplification in Pigmalion at the Châtelet, proved here it didn’t have to be so with a director and designer who know what they’re doing. One friend joked that the sound was “Wagnerian.”

So, “extraordinaire” indeed, as was the long applause (with many people on their feet and much cheering) in a city where one or two curtains are the norm and the lights usually go up within minutes, if not seconds. Surely, now, we can have a video?
2011 Atys Lully Opéra Comique 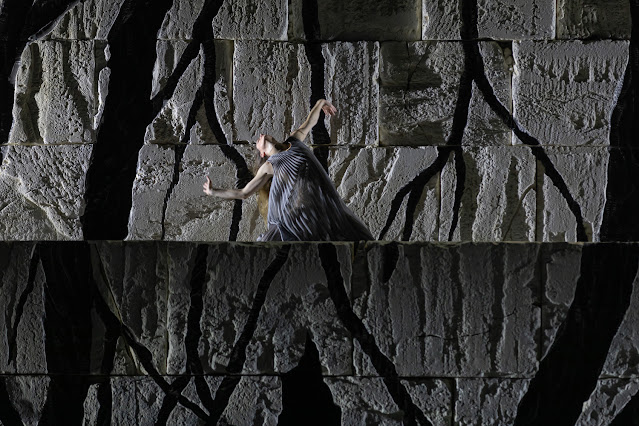 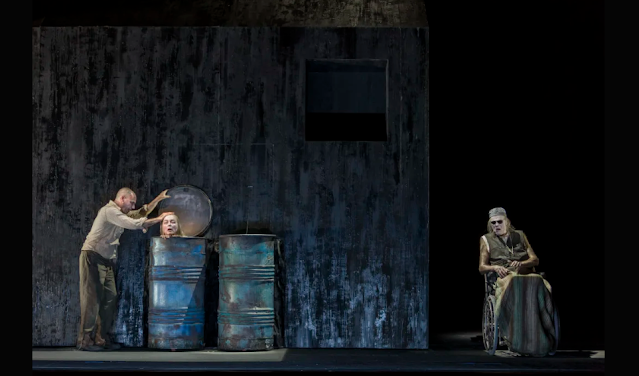