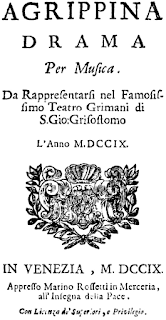 As I sheltered in a museum café from the cold and rain that made visiting Ghent this weekend more difficult than it should have been, the lady having soup at the next table explained that she no longer went to the opera there because instead of putting on shows people want to see, they force-feed them modern productions. Would she really not have enjoyed this ingenious, effective approach to Agrippina?

It was a bright, colourful, “dinky” staging (“So smart!” someone exclaimed to me, like one of Evelyn Waugh’s Bright Young People, before shooting off to the bar at the interval). The “concept” was 80s soap opera, a low-budget Dallas-cum-Dynasty lookalike, played with a great deal of humour and fairly tongue-in-cheek. It involved a variety of small, TV-studio-style 80s sets that could be quickly wheeled on, latched together, taken apart and wheeled off again, scene after scene, by stage-hands in black. We had Agrippina’s office, a sawn-off Cadillac (so we could see inside), a boardroom entered from a lift (38th floor), a tacky living room with a much-used cocktail globe (whisky per tutti, you might say, was a running gag), Poppea’s apricot flock-papered bedroom (with multiple wardrobes for hiding suitors in) or her poolside chaise longue, a restaurant, the be-stetsoned Claudio’s pink marble bathtub piled high with foam, Agrippina’s breakfast table…

Above, throughout the work (and even before and after, as opening and closing titles rolled), was an asymmetrically-divided screen commenting on the action or giving us close-up details in video or stills: skyscrapers, oil wells, Agrippina’s stockinged foot sliding slowly and seductively aong the black leather sofa, Agrippina smoking (a sort of pictorial leitmotiv for Agrippina inwardly scheming), the bacon, egg and beans she had for breakfast (later violently squidged up in anger by Nerone), a tennis court (during restaurant scenes there were diners in tennis gear), an ashtray, a decanter, a crystal chess set, the red “digital” figures of a lift floor indicator… If this had involved more video or more change it would have been distracting, as in Warlikowski’s Lulu. Slower-moving, it wasn’t: the two levels worked together well.

The acting, in big hair and period gear (and a mounting crescendo of loud costumes for Agrippina, culminating in Mae West black and spangles) was meticulously detailed and perfectly timed, ranging from out-and-out bedroom farce - comical lovemaking on the sofa, Nerone and Ottone hidden among Poppea’s dresses and shoes - to authentic drama. I was glad that this production didn’t pull the rug from under the serious arias’ feet, so to speak, by playing them tongue-in-cheek or for laughs. Some tragic relief is welcome.

It ended with the whole cast grinning to the audience for the final shot of the series before congratulations, relaxation and drinks all round. And, as with Poppea in Lille, the subsequent grisly history of the various characters was recounted, here in projected text, over the final chorus. I noted, incidentally, cheeky references to Monteverdi’s work in Sunday’s continuo.

Vocally, though the cast was remarkably strong all round – a genuinely impressive achievement for a city the size of Ghent: 250,000 people – it was really the women’s afternoon (I did, however, think I’d put in a word for Gevorg Grigoryan, who seemed under-used as Lesbo). José-Maria Lo Monaco, singing from a music-stand at the side while a production assistant acted the part of Nerone, was a wonderfully dark and expressive mezzo, contrasting well with Kristina Hammarström’s equally wonderful but grainier, more masculine sound. Ottone’s disarray in act two was one of the afternoon’s many fine moments. Elena Tsallagova is a stunning, silvery soprano whose commitment, generosity and enthusiasm risked even leading her, at times, astray.

But I said it before, when writing about Poppea in March this year: Ann Hallenberg, if she ever stumbled upon this blog, would probably not thank me for saying it, but even with a more consistently strong cast than in Lille, she stands head and shoulders above her younger colleagues in vocal maturity and subtlety. Excellent though they all were, none had the same fluency, facility or dramatic and dynamic range, none made it all look so easy when we all know it isn’t, and in comparison (only in comparison) they sounded monochrome. I say this in no way to detract from their achievement; I say it only to pay tribute to Ann Hallenberg’s, which is really remarkable and deserves it. Her final outburst was simply mesmerising.

The local, un-“HIP” orchestra, under Paul McCreesh, reminded us from the vaguely chaotic opening bars (it was just a cold start: everything warmed up very quickly) how used we’ve now become to “HIP” performances and the different balance between stage and pit that sets up. At times I thought McCreesh could have pushed harder, but that’s an obsession of mine and surely he knows better.

The theatre in Ghent, by the way, is an interesting example of a kind of 19th Century arts complex, with various slightly-faded neo-baroque and neo-rococo saloons and foyers tacked on the main building, where you find food and drink in abundance. The auditorium has multiple doors all round, making access to the stalls quicker and easier than in other places. But I was astounded, after the second interval, to see a dark, burly man enter at the last minute from the wrong side and disturb the whole of the second row (I was on the seventh) to reach his seat on the other. I wonder who on earth he could have been?
2012 Agrippina Ghent Händel Vlaamse Opera