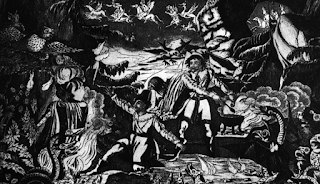 It isn't often you get a chance, in Paris, to see Der Freischütz, so it's a real shame, when it comes round again at last, if it fails to live up to your hopes.

In this case, the cast was excellent and the creative team's ideas had definite potential, but these weren't enough. I left the theatre thinking that with proper directing, a better orchestra and a different conductor it might have been transformed into a much more convincing show. I'll start with the cast.

Stanislas de Barbeyrac and Johanni Van Oostrum made a near-perfect principal couple. His voice is, to my mind, just the right weight for Max: to cast a Heldentenor in this rôle seems a bit absurd to me. At the TCE, not needing to wear himself out as at the Bastille a couple of weeks back, especially here in a production that often had the soloists lined up on tip-toe right over the pit, he sang firmly (he may not be a Heldentenor but he isn't a tenorino either) but gracefully. Van Oostrum has an interesting timbre, warm and round, with quite a sumptuous middle register. I imagine a different production would  have helped her project a more clearly-defined personality. As the cheeky Ännchen, Chiara Skerath offered a good, lively, soubrette-like contrast, and if Vladimir Baykov's singing was a bit rough round the edges, that was no particular problem as the wicked Kaspar, though the lack of proper directing left the darkness of his character underdeveloped.

All the singers and the chorus could have done a better job with a change of orchestra and conductor. Insula play on 'period' instruments, but that brought no particular bite to the score, no vivid colours or contrasts. On the contrary, their playing was provincial and plodding, undisciplined and dull, with the exception of the lovely solo viola obbligato. But even they might have livened up with a more dynamic conductor: the tempi were sluggish and this most wonderfully dramatic score lacked drama and excitement. Weber should zing, not slouch. And while Laurence Equilbey was visibly attentive to her soloists, the hunters' chorus was perilously close to going off the rails.

The creative team was from an outfit called (I've no idea why) Cie 14:20 specialising in what they call 'la nouvelle magie' - new magic. From what I saw on Monday night and have also seen on their website, they're a kind of Cirque de la Lune, as if Cirque du Soleil had ditched its Willy-Wonka-cum-steam-punk aesthetics and glowing colours, to plump for Zen minimalism in dark monochrome instead.

They emptied out a whole bag of visual tricks, relying on the lowest possible lighting for their effectiveness: this was the darkest production, literally if not figuratively, I can ever remember seeing. Video established the forest setting, in a rare, occasional splash of autumn colours, and in act two, the ancestor's portrait appeared on a giant, wide screen, askew. Clever lighting and projection on and around the finest, translucent gauzes and the use of two-way mirrors meant that, peering into the gloom, you were never quite sure who was real, who was a ghost, who was doubled, who not. A young juggler and acrobat in black represented Samiel, sometimes creeping and sliding over the floor, sometimes doing somersaults, sometimes, thanks to invisible wires, gliding or striding through the air or helping Kaspar do the same. He juggled luminous balls, like will-o'-the-wisps, no doubt representing the bullets, and these, too, on invisible wires, took on a life of their own. Lighting, when there was any (at one point, even the lights on the music stands in the pit went out), was weirdly erratic.

The trouble is that these effects, while nicely done, remained pleasant, mildly curious effects: they weren't woven into a coherent dramatic whole, nor in reality were they outstandingly dramatic. Samiel came over as a pretty cool, laid-back young juggler, the kind you might find doing similar tricks on the street or in a Métro corridor, and the Wolf's Glen scene, which surely should be fast and furious and where you'd expect a team of magicians to come into their own and scare the living daylights out of us, was a damp squib, gone before you even had time to realise nothing spectacular was actually going to happen. The hermit's ascension, on those invisible wires again, at the end, was more nearly ridiculous than sublime. 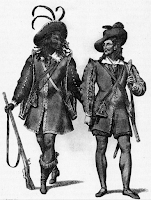 Nor was there much sign of anyone directing. This wasn't, of course, the first time (nor, unfortunately, is it likely to be the last) a chorus has been lined up at the rear, arms dangling, instead of doing anything - but you'd think that, when a local hero has just apparently shot his bride-to-be dead, somebody would express shock or at least surprise, and budge. Shortly before, not even a gasp or wide eyes had greeted the funeral wreath.

Similarly, the soloists (all in 50 shades of puritanical grey, like the chorus) tended, as I mentioned above, to be lined up over the pit, usually to make room for the manoeuvring scrims behind - great for audibility, less so for dramatic impact. One criticism of Clément Cogitore's recent production of Les Indes Galantes at the Bastille was that it reduced Rameau's work to the level of a mere accompaniment to a series of visual statements. I don't agree. But here, I must say it occurred to me that Cie 14:20 didn't really know what to do with the opera and in the end just used it as a prop for a demonstration of their modern magic. And as I wrote above, they emptied their bag of tricks: not having enough to sustain two-and-a-half hours of opera, they ran out of gadgets and were forced to repeat themselves.

Here, the incomparable Maestro Wenarto brings as much colour and contrast as anyone could wish for to 'Kommt ein schlanker Bursch gegangen'. Not sure if they're period instruments, or if he's using a critical edition...
2019 Freischütz Paris TCE Théâtre des Champs Elysées Weber