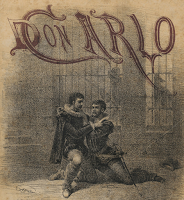 Having premiered this production two years ago in French, the Paris Opera is now giving it again in Italian, with a different conductor and mostly different singers. The result is more dramatic overall, and theatrically more coherent and convincing, making better sense of Warlikowski's characteristically thoughtful production.

Jordan's conducting in 2017 seemed, as usual, to aim for sleek symphonic magnificence with a uniform, high-gloss finish. Luisi's is more genuinely operatic in feel, offering greater dramatic contrasts and, so I thought, a wider dynamic range, with some extremely tender pianissimi. Visibly attentive to the singers at all times, he conducts as if he loves Verdi's score.

Like Kaufmann, but of a vocal type many people might say sounds better in Verdi, Michael Fabiano is altogether 'at home' with Warlikowski's vision of Carlo(s): tortured, brooding and suicidal. His acting is intense, and his singing is generous and committed - exactly the kind I like best. He takes risks, singing with a subtle dose of freedom and flexibility in relation to the written score, and as a result the vocal line seems to spring naturally from the drama. I was interested (and pleased) to see, a couple of days after his premiere, one of the toughest critics in the French 'blogosphère' write that Fabiano's portrayal of Carlo(s) would 'mark the rôle.' Étienne Dupuis was an impeccably musical partner as Rodrigo and I hope we'll see a lot more of him from now on.

Two years ago I complained that 'Elisabeth looked more like a peeved and sulky Russian nouveau-riche cheated out of a million' than the 'noble, sympathetic queen tragically deprived of the love of her life' whom Nicole Car, fragile but upright, today personifies to perfection. Some may say her voice is too light and bright for the part, and the Bastille is perhaps not the ideal place to hear her, but her singing is sheer, silvery gorgeousness, beautifully musical, with total mastery of the notes from bottom (which, in particular, is not always the case) to top. So much so that one critic remarked, reviewing this cast, that she made it sound easy. But we know it isn't.

Wonderful though Elīna Garanča’s Eboli was, it's easier to imagine Anita Rachvelishvili having a sleazy affair with the King. Vocally, however, I confess she had me worried. On Thursday evening she seemed to have two distinct voices: an amazing, virile chest voice like a big brass section, or maybe a Cavaillé-Coll, at full blast; and a head voice, resounding in the medium but troubled at the top. There was no sense of a passaggio between the two, just an odd, abrupt break. This didn't prevent her stopping the show with 'O don fatale', in which she also gave us some of her magnificent pianissimo singing, but the aria is a show-stopper in itself. I hope that what we heard was just a sign of passing fatigue after half a dozen performances - not a sign of trouble to come.

René Pape was a more convincingly authoritative Filippo than the relatively youthful Abdrazakov, who could easily have been Kaufmann's brother. His singing is now at the 'très beaux restes' stage, a display of subtle artistry in which experience compensates for any decline in vocal power. His acting is equally subtle: Warlikowski's king is not exclusively authoritative, but a man struggling to cope (and dependent on drink) under the weight and demands of authority. Vitalij Kowaljow's Inquisitor, while not verging perilously on the comical as in 2017, perhaps lacked vocal darkness, but now I'm quibbling.

The Pompidou Centre currently has a stunning exhibition - one of the most magnificent I can remember ever seeing - about the relationship between half a dozen works of literature and Francis Bacon's painting. As Bacon is an artist I've long venerated but still found enigmatic, this time I got ready by reading, in advance, the catalogue, a biography, his Brutality of Fact interviews, and the Oresteia. It paid off. I mention this not only because questions raised in Aeschylus are raised again in the opera,  but also because the work of Krzysztof Warlikowski, a director I have come to admire more than any other, can also be enigmatic - so a bit of due diligence may not go amiss.

Two years ago I found his production of Don Carlos less complex than usual. But I realise now, having taken the time to consult better-informed people than myself, that that was certainly more my fault than his: there was so much I missed the first time round. I don't think I'd even twigged to what are, now I know better, obvious links, in this production, with Franco's Spain. I certainly hadn't taken any interest in the real-life Princess of Eboli, so I had no idea that her need for the famous eye patch might have had its origins in a fencing accident. I'm not sure I related the image of Saturn, or some other monster, devouring a son to Goya. Also, Warlikowski adds layers of resonance to his productions through references to films, and as I'm practically allergic to the cinema, I don't necessarily get them - in this case for example, a Finnish one I'd never even heard of, The Fencer; the work, so it seems, of Tarantino; or, through some of the ponderously regal costumes, in the auto-da-fé scene in particular, Visconti's Ludwig.

More dramatic conducting, a cast better-suited to the director's intentions, and a better understanding of those and therefore of the production overall made this the most exciting Don Carlo or Don Carlos I've ever seen. I hope that, with this cast, it makes it to video, as it did in the French version in 2017.