I’ve decided this report will be truffled, as the French say (i.e. like a goose liver or white pudding) with quotations. Though I’ve said before it’s probably not pukka to quote yourself, it saves time; so I started out (you’ll soon see why) going back over my recent write-ups from Brussels, looking for things to copy and paste. Then, perusing some excellent web sites, I noted that one writer at least thought what I thought on Sunday (perhaps that was why I found his site excellent), so I decided to carry on quoting…

The cast for this Lucrezia was about a good as you’re going to get, dominated (Charles Castronovo being unwell) by Elena Mosuc, who’d already given us a good afternoon at the same venue as Lucia: “She makes an unusually dark, juicy, fruity Lucia,” I wrote in 2009. “The notes are certainly there and often very beautiful, and the top ones maintain their body, indeed sound easy”. Same on Sunday, and as noted on ConcertoNet.com (my translation): “The Romanian soprano emphasises expressiveness and dramatic credibility over vocal fireworks, a sovereign virtue in this kind of work, which can rapidly sink into vulgar display”.

Castronovo was, as I said, announced sick, so he didn’t ring out as he might, but he certainly still had a magnificent timbre (or timber, as they say on Amazon) and put in a performance that was “more acceptable than many [...]  Silvia Tro Santafé,” continues ConcertoNet, “in the breeches role of Orsini, showed herself on sparkling form.” Her voice is agile, surprisingly powerful (she’s a diminutive figure) and has an interesting grain. And I’d agree with the author that Paul Gay was less impressive: more audible than at the Bastille, but “monolithic” and, I thought, verging on bluster.

The supporting cast included one or two very interesting voices, but I lost track of who was who. The orchestra wasn’t at its best, perhaps because of the odd set-up to the side of the circus arena. The playing was undisciplined, with one prominent early entry. But all round this should have been an excellent afternoon of Donizetti, if such a thing exists, and Elena Mosuc certainly went out in a blaze of glory: this was, we were told in the programme notes, the original 1833 version, which ends with Lucrezia’s dramatic final scene.

I’m not wholly decided as to why, apart from that final scene, I was bored. Have I now reached a stage where I can no more stand Donizetti, even well sung, than Bellini? In which case the production was a contributing factor. Or was it almost entirely the fault of the production, which, though elaborate, wasn’t carried off with enough conviction (“a bit short of inspiration and lacking magic,” said Forum Opéra) to work?

No doubt coincidentally, but still – and this is where I started rummaging for quotes in my own recent reports – this production had much in common with the previous two in Brussels. Reporting on Manon Lescaut, I wrote: “The simple […] way to describe this production to anyone who saw La Monnaie’s recent Traviata would be to say it was more of the same, only in black sets instead of white […]. There were similar acts of gratuitous sadism on naked girls in a corrupt, criminal, nouveau-riche milieu…” For Lucrezia, we had yet more of the same: shiny, latex-black this time, but in a sinister, circus setting, dominated by four giant figures over the entrances to the ring: on the left, a creepy, grinning, joker-like clown with red hair; on the right, the virgin, haloed with stars, heart pierced by a red neon beam; between them, under the royal lodge as it were, had there been one, death: a coronetted skeleton; and opposite, where the elephants should come out, the black and red skirts (a curtain) of a corseted whore with bare, tattooed breasts (that rather ridiculously became a balcony for Lucrezia in act two).

Manon's name was written, on a bar, in neon; here it was Borgia over the red curtains, repeated in luminous Gothic characters on the catwalk. Both Bs were shot out by Gennaro with a pistol.

As in Traviata (me again) “The bored, idle, yobbish rich, all in black […] dinner jackets with open-necked shirts, plus one with a leg mysteriously in plaster - mooch around in a drunken stupor”. The broken leg, plus, here, broken arm, broken ribs or stiff neck implied by the use of a variety of orthopaedic accoutrements, are to me a new and, as I said, mysterious directorial tic. I will follow it with interest.

As Forum Opéra puts it: "Joosten does not avoid certain juvenile clichés and provocations to no obvious point: neither the young nuns in scanty underwear in the prologue nor the soubrettes horse-whipped S&M style in act two – decidedly a banal event at La Monnaie this season – are of any use in clarifying the plot or bringing about the sense of fright that’s needed”. Or, as ConcertoNet.com puts it: “The show does not avoid the tics that are a feature of today's opera stage: how many times a year must the assiduous spectator witness scenes of inebriation in which the drunkards stagger about, bottle in hand, or orgies? Decidedly, naked women are a Leitmotiv at La Monnaie this season”.

And back to me: “Simulated sex by singers on the opera stage is singularly unconvincing and ultimately, with rare exceptions, just corny or, to put it the Gallic way as the man behind me did, ‘conventionnel dans sa provocation’”. The same goes for simulated violence and drunkenness.

It’s true that, in this plot, the young noblemen party a lot. The production gave them three kinds of fancy dress: in Venice, pigs’ masks and ecclesiastical accessories (mitres, stoles and so on), hence the nuns (in red high heels and not much else under their robes); in Ferrara, first clowns’ faces then, for the party they would all die at, poisoned, cassocks (or is it hassocks?) and death masks. The count’s henchman were dressed for A Clockwork Orange, swaggering round, in that half-hearted way chorus members do, in bowler hats, red noses, red gloves and codpieces and wielding foam cricket bats; the girls who brought in the fateful/fatal Borgia wine looked like big-haired witches in long robes, until the latter fell off and they bared their bosoms (again) to be ridden by the gents – or was it the girls who sat astride the men, flicking at them feebly with riding crops? I don’t remember.

Whatever. It was, as Sid the Sexist might have said if he had taken out a Sunday matinee subscription, “Tits oot for the lads” for the third time running at La Monnaie. to equally little effect. The ideas in this production weren’t intrinsically bad, but the directing wasn’t strong enough to get the cast to pull it off convincingly: it wasn’t sexy, it wasn’t shocking, it wasn’t frightening. With such a good cast, I’m afraid this Lucrezia might have been a better bet in concert. 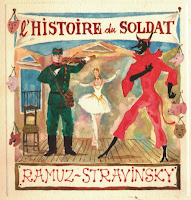 When I was a teenager, on one of my first forays abroad, I had the good fortune to be invited to stay with a cultivated Swiss family in Lausanne, who opened up intriguing new worlds for me. They had real paintings, parquet floors, oriental rugs, a grand piano, and what they called their salon de l’art brut, a spare room kept empty but for their own improvised artworks. They introduced me to the first opera I ever knew and owned on record, Les Mamelles de Tirésias, which would later play a part in my getting into university, as I talked about Apollinaire's play when discussing the theatre of the absurd during my entrance interview. They also introduced me to Stravinsky’s Histoire du Soldat, the words to which the whole family seemed able to chant merrily by heart while it was on their gramophone, (which was hi…
Read more 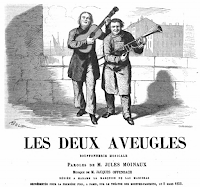 In case anyone doesn’t already know:

The vocation of the Palazzetto Bru Zane – Centre de Musique Romantique Française is the rediscovery and international promotion of the French musical heritage of the long nineteenth century (1780-1920). Its interests range from chamber music to the orchestral, sacred and operatic repertories, not forgetting the lighter genres characteristic of the ‘esprit français’ of the nineteenth century (chanson, opéra-comique, operetta). The Centre was inaugurated in 2009 and has its headquarters in a Venetian palazzo dating from 1695 which was specially restored for this purpose.
[From the Bru-Zane website]

Over the past few years, I’ve enjoyed rediscovering some rare French operas through Bru Zane’s recordings, so I was glad to see they were planning a l…
Read more